A Day in the Life of a Teaching Assistant

Diane gets to work by 8 o’clock, a teaching assistant at her local high school, she uses the three quarters of an hour before lessons start to get resources ready and any photocopying that the teachers in her department may need doing. This is also the time when she finds out which teachers are off sick, if they’ve left any work and who will be covering their lessons. Part of her role is to make sure the cover teachers have everything they need.

At registration Diane makes a note of the students that are missing, and checks on the computer to see if there is a reason, or if their parents have phoned in to say why they are off. Armed with a list of missing students from the department she heads off to phone parents and guardians, this is often one of the more difficult parts of the job, most of the parents are happy to hear from the school, recognising that if their child hasn’t made it to school something may have happened to them, but some seem to think that this is an intrusion into their family lives.

Often it is a simple mistake, with one parent assuming the other had phone the school to say the student in question is sick in bed. 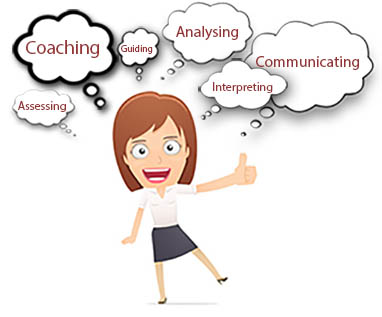 First period on this day is paperwork, compiling the student records and updating test and exam scores, but today Diane’s other role as a first aider is more important, one of the boys has slipped and hit his head. Her training means that Diane knows to send another student to get the school secretary to call an ambulance, she also makes sure the student comes straight back in case she is needed again. Often in these cases Diane would have to accompany the child to the hospital, but his parents live within five minutes of the school, and his Mum is there almost as fast as the ambulance. The student is sitting up and talking to the paramedics, but they decide he needs to go to hospital and take him and his Mum off.

Second period is Diane’s first of the day to interact with the pupils, in this lesson her role is to help some of the weaker students when they struggle, here she explains she has to be quite careful.

“My daughter is also a teacher, and a few years ago she had a lot of problems with a teaching assistant in her classroom, this lady would interrupt her whilst she was talking to the class, shout out answers and occasionally corrected her in front of the students.” Diane explains, “it was so upsetting for her, she began to have problems in the class with the students copying this teaching assistant.”

Instead Diane sees her role as that of an expert learner. She works across a number of subjects, some of which she has little or no background in, but here rather than try to teach the weaker students, her role is to make sure the students are listening and that they understand the methods used.

Break is a wet and windy affair, but Diane’s role is to patrol around the spots where students might be smoking, and to try and stop them leaving school premises. What advice would she offer to anyone starting this job?

“Good wellies and a warm jacket.” She laughs as we go round the back of one of the buildings. “Girls,” she breaks away to talk to a group of girls. “You know that’s against the rules, now can I have your lighters.” The girls stub out their cigarettes guiltily and surprisingly hand over their lighters to her.

After break is the block in her time table that Diane had circled and drawn a smiley face next to. Six students are waiting for her outside an empty classroom, she shoos them in as she takes off her jacket, “Coats on the pegs bags under your desks,” she calls as she makes her way to the front of the room, “Right you lot according to Miss. Jones need to practise your descriptive writing,” she checks her notes and turns back to the four boys and two girls, “So what might be a good topic to pick.”

Within minutes they’ve decided to write stories about climbing Everest, and here Diane seems to comes alive, encouraging and steering the pupils along the paths, praising, and giving constructive feedback as their stories unroll. It’s clear that these 50 minutes will make a huge difference to their learning.

Lunches are staggered to allow all the students space to eat. Diane heads towards the staff room to grab her lunch, but a desperate shout from one of the teachers calls her back, the computer in his classroom isn’t working, and he can’t leave the class alone to call IT support. Diane ducks back into her office to call up the IT guy from down the hall.

After lunch Diane is in two more classes, this time supporting an individual learner with special needs. Throughout the lessons she helps the student write down the written work, and puts in all her effort to keeping him on track. It’s a hard task, but she never stops smiling.

Between the two lesson as Diane steps into the corridor a student running past knocks her folders out of her arms. Suddenly she’s not the kindly calm Diane that she has been, the boy gets a dressing down worthy of a drill sergeant, “I may not be a teacher,” she explains, “but I am a member of staff here, and we all have a duty to ensure good and safe, behaviour.”

Finally the last bell goes and students stream out of the buildings, suddenly after all the noise and shouting the buildings are quiet. The staff start to come out their rooms, a little battle weary, but smiling now that the day is over. But today isn’t over yet for Diane.

“So many people think that being a TA starts when the pupils arrive and finish when they leave,” she says with a smile, “but I have detention to sort out.” She hurries off to the room where the students on detention are lounging, “Where’s Steven,” she demands, “and Cherie, Cherie Blake.” Less than a minute later she’s back, “there’s three that have decided not to turn up.” She says firmly. “Their parents will be pleased to know.”

She rings the offending student’s parents as she starts to send out the letters and texts to parents of students on detention over the next few days.

“Mrs Blake.” She says pleasantly as the phone is answered. “Cherie has decided not to turn up to her detention tonight, oh you didn’t know, well I’m sure you received the text I sent, and Cherie said that she knew about it when I asked her yesterday.” She pauses, “no Mrs Blake it wasn’t a bit of fun, we take bullying very seriously, well Mrs Blake if that’s what you think then I will book you an appointment with the headmaster.” She hangs up and counts to ten under her breath before smiling and carrying on to the next phone call, this one is much better, and she hangs up with a promise from the boys Dad that he will ground his son for the rest of the year.

“We have some, only a few, that think we’re picking on their son or daughter, but every member of staff knows they have the support of management.” She explains.

It’s nearly 5 o’clock when she finally leaves her office and heads home, “See you tomorrow.” She calls to the caretaker as they pass in the car park, and from her smile and cheerful tone it’s clear that despite the hard work and long day she’s had, she’s already looking forward to tomorrow.

“They know me,” she says referring to the students, “I’m in class helping, I’m with them at lunch making sure they’re safe, I go on field trips with them and I take them to visit colleges in year 11, if they fall over often I’m the one who patches them up, and yes, I’m the one who rings home to tell their parents they’ve got detention. I love my job, and I think my job loves me.”

The Life of a Male Teaching Assistant

Stephen Myers is a teaching assistant for a primary school in the West Midlands and has written a guest post on the challenges of working with SEN students.

“Seven years ago I decided to change my career path and, after much deliberation, settled on a training course to become a teaching assistant. As inferred, it wasn’t a split decision and there were a number of factors involved in the process. My daughter’s school friend is autistic and my daughter had told me about the wonderful job her friend’s teaching assistant had been doing to help support her in mainstream education.

I had been a cab driver for several years prior to my decision, but it was time to find something meaningful in life. Something that would make my daughter proud and a job that could enable me to work around my primary job as a single parent. But I was worried about being one of the few percent of male TAs. I worried about what my friends thought and whether I was actually up to the job of working with young people.

The process of finding a teaching assistant role back then wasn’t too difficult. I volunteered here and there for several months and completed a few courses and suddenly a TA role surfaced to help support some new TA students joining the school. The students begged me to take on the role, which I did and I haven’t been happier.

I got ribbed by my cabbie colleagues for a while (I was still working part time at the cab office), but when they saw how I had changed and grown, they supported me fully. I was also initially taken aback by how few male teaching assistants there are and felt a little intimidated working with so many (talented) women. They took me under their wings and I became the little brother of the family!

I love my job and I wouldn’t want to do anything else. In the last seven years, I’ve improved my knowledge by taking further specialist SEN courses and I’m looking at working in a special needs school at some point in the future. I know I’ve been a great role model for a number of students I’ve supported – all through understanding, listening and injecting a little sense of humour into the mix.

Some male students often find it difficult to communiate with female members of staff about personal problems, which I’ve helped them overcome.

My daughter is proud of what I’ve achieved and she’s even studying to become a teacher herself.”