An Inspector Calls…. TAs’ experiences of Ofsted by Rob Webster 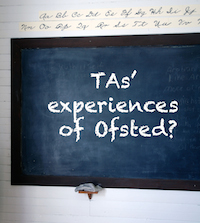 Last term, we posted an invitation on this website and on social media asking TAs to share their experiences of Ofsted. We had over 60 responses from TAs, the majority (73%) of who worked in primary/infant schools; 20% worked in secondary settings and 6% in special schools.

Many TAs described the pressure and tension that formal inspection brings. ‘Ofsted hysteria’, as one TA put, is an endemic condition in English schools, and there are many accounts and reports attesting to the stress of and fallout from being ‘Ofsteded’. For teachers and school leaders, the long shadow Ofsted casts over their working lives has serious implications for their mental wellbeing.

Our aim was to find out to what extent, if any, TAs are included in and affected by the inspection process. Our sample was not scientifically selected, so we cannot make any generalisable claims based on the evidence we collected. Nevertheless, our analysis offers some insight into how TAs experience inspection and what it means for them. We have used some of the comments sent to us to illustrate some of the findings[1].

It is an open secret that the call from Ofsted causes school leaders and teachers to raise their game like nothing else. The frenzy before a visit prompts a comparison with the old joke that the Queen thinks the world smells of fresh paint. It was no surprise then that a number of TAs reported how normal routines and practices were changed when inspectors were due.

“Ofsted do not get a true impression of how the school runs on a daily basis… Where TAs would cover PPA during inspection, teachers often take back their classes”.

“Some TAs were taken off normal duties with pupils and given resource work to do instead of being part of inspection”.

These, and some other practices TAs reported, suggest that schools behave in ways they hope would prime the outcome.

“TAs were told… how to respond to questions they may ask us”.

“The teacher had giving me instructions to keep an SEN child out of the classroom because didn’t want to fail the observation”.

There was a sense in which decisions made by teachers and school leaders played to the expectations of inspectors, but put TAs in awkward positions.

“When Ofsted come into school normal routines are changed and we are suddenly asked to be in class – then a complaint is made that we are ‘just sitting in class’. I feel like we can’t win”.

As one HLTA, who was observed leading a Reception class while the teacher had PPA, described:

“[Inspector’s] comments were fair – too long on the carpet, but I had been advised to keep them sitting as long as possible by the class teacher!”

The Ofsted inspection framework states that evaluations must be supported by observations and supplementary evidence that may include ‘discussions about teaching and learning with teachers, TAs and other staff’. Yet only a handful of TAs reported that they were interviewed or were mentioned in the feedback to school leaders. Those that did mostly described positive experiences:

“[Inspectors] Were keen to know how I supported progress and learning. Positive feedback given in terms of what they saw – they liked that I didn’t sit with one child. They liked that I promoted independent working and that I knew targets and what the child needed to do to get there”.  Secondary TA

“Very secretive… Feel like you aren’t included or important enough to be consulted with”.

Many TAs reported that they were not included in the inspection process: they felt overlooked in observations and their views were not sought.

“Throughout the inspection I wasn’t spoken to by any of the inspectors and they didn’t appear to take any notice or pay any interest in how I was supporting the child”.

“They didn’t ask us any questions or give us any feedback”.

TAs felt that being ‘ignored’ by inspectors suggested that their contribution was not valued.

“Your support in helping teacher for the lesson seems to go unnoticed. Makes you feel forgotten”.

“I have been through 3 Ofsted inspections, during all 3 I found that for the most part I was ignored by Ofsted inspectors and have found some of the inspectors to be rude, as if being a TA isn’t important”.

Remember, our survey was relatively informal, so we cannot be certain to what extent these experiences are shared more widely. Some meaningful research into TAs’ experiences of Ofsted would make a useful additional to that we have on teachers’ experiences.

Nevertheless, it is worth speculating on why there seems to be variation and vagueness in relation to Ofsted’s inclusion of TAs in the inspection process. Historically, Ofsted guidance relating to TAs is very limited. In the new 88 page School Inspection Handbook, TAs get just four mentions; three of them in just one 53 word paragraph.

This paragraph instructs inspectors to ‘evaluate the use of and contributionmade by TAs’. To do this, inspectors focus on school leaders and teachers, as it they who make the decisions about how TAs are used. This might explain why TAs feel ignored in observations. There is also the added factor of accountability. Regardless of any input from TAs, it is teachers, not TAs, who are answerable when it comes to pupils’ academic outcomes.

The rest of the paragraph asks inspectors to ‘consider whether TAs are clear about their role and knowledgeable about the pupils they support’. One would imagine that to determine this reliably, inspectors should consult TAs. Yet the experience of many TAs responding to our survey suggests this issue is either not considered or a judgment is reached on the basis of some other information.

Arguments for and against school inspection are well rehearsed, and until (or unless) a potential alternative is found, it looks like Ofsted is here to stay. Calls for reform of Ofsted (and its abolition) are based not only on the stress and pressure it puts school leaders and teachers under, but also the basis on which it makes unreliable and inconsistent judgments on schools.

The more immediate issue in relation to our survey is how should TAs feature as part of inspection. Given that TAs represent a quarter of the school workforce, and a third of the primary school workforce, it seems remiss not to include them in the formal evaluation of school processes and outcomes. For that to happen though, we need a clear sense of what it is TAs are expected to contribute.

Presently, the Ofsted framework reflects the gaping hole in national education policy and practice where there should be a clearly defined role and purpose to the TA role. As the education world steels for next May’s general election, we will be keeping an eye on political leaders to see if they can come up with an answer.

[1] All italicised comments are from TAs working in primary and infant schools settings, unless stated otherwise.

Rob Webster conducted research on the impact and deployment of TAs at the Institute of Education, London. He currently works as a consultant/trainer, using the research to help schools improve their use of TAs. He is co-author of two acclaimed books: Reassessing the Impact of Teaching Assistants, and Maximising the Impact of Teaching Assistants. Prior to all this, Rob worked for six years as a TA. He also leads the MITA programme and you can follow him on Twitter @maximisingTAs.

View all posts by Rob Webster →